There were lots of highlights in sports over recent days. The biggest was likely how the Superbowl ended. With less than a minute in the game, the Seahawks decided to pass. We’ve heard the breakdown of the big game and TV commercials. So will Marshawn Lynch get fined and what about Serena’s fat check?

The game was a thriller down to the end. The commercials had their fare share of ‘hits and misses.’ This year’s Superbowl was the most watched TV program in history. Lynch didn’t get the call to run the ball. But his branding success beyond the big game says something about how to ‘coin a phrase.’

His approach to media has put a dent in his wallet. But he’s been able to turn that around into a branding ‘phrase that pays.’ This is also true for ads that are a hit. They appeal with humor or to the heartstring or by being hip. That’s how a favorite song, movie or commercial can empower our days in unique ways.

Some fans were drawn to the Nissan 90-second spot about ‘Daddy love’ while others were drawn to the Budweiser tale about ‘puppy love.’ To empower our days means trying to see something we didn’t see before, or experiencing something in ways we haven’t before. Isn’t that how the pros up their game?

Serena Williams continues to do that on the court. She’s now won 19 grand slams as one of the oldest ever. Her success is less about how she coins a phrase. It’s more about how she empowers her days and picks a next-level trail to blaze. Win, lose or draw, Lynch and Williams are laughing their way to the bank. 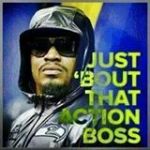 Lots of highlights on the sports page. The Superbowl finish had some in rage. With less than a minute left on the clock. Seahawks coach paused to take stock. Decided to pass instead of run. That’s how they lost and the Patriots won. So will Marshawn Lynch again get fined? Or Serena’s check get nickel & dimed?

A thriller down to the end. Unclear who would rise or bend. Commercials had their share of ‘hits and misses.’ Most watched TV program without the kisses. Eventhough Lynch didn’t get the call. Seahawks could have run the ball. Lynch making waves beyond news wire. Coining a phrase in ‘beast mode’ attire.

Talking to media not his first love. Puts a dent in his wallet not glove. Runs over athletes with his backfield plays. Turns things around with a phrase that pays. True for ads that are a hit and pop. Using humor, heartstring or a little hip-hop. A favorite song to empower our days. Or movie-showing in unique ways.

Some drawn to Nissan’s ‘Daddy love’ spot. Others think Budweiser’s ‘puppy love’ was the shot. To empower our days means seeing things in a new light. Or even experiencing things at a new flight. Isn’t that how the pros keep upping their game? Just like them we can enjoy reaching the same.

Serena doing that on the court for sure. At 19 grand slams she’s ready for more. One of the oldest in the game to do so ever. Less about coining a phrase that’s clever. It’s in how she empowers her days. And picks a next-level trail to blaze. Win, lose or draw in the tank. They’re laughing their way to the bank.

Tip: Upping our game and empowering our days mean seeing and experiencing things in new ways.
Talkback: Will Marshawn Lynch or the Patriots get fined and how might Serena spend that fat check?
Groove-Tracks: Katy Perry ‘Roar’ – http://youtu.be/CevxZvSJLk8 and Bruno Mars ‘Uptown Funk’ – http://youtu.be/OPf0YbXqDm0