What does the name Steve Harvey bring to mind? That could depend on the first encounter. Some people might go as far back as his days doing Amateur Night at the Apollo. Others might know him from his comedy circuit. No matter how he brings it, Harvey’s worked his way up to becoming a powerhouse.

That’s no small task. In every career pursuit or dream track you’ll find lots of high achievers. These are people who demonstrate passion in their work. They operate with an engaged sense of purpose. But the ones who become a powerhouse figure in their fields are those who possess PQ or personality quotient.

Everybody knows what IQ can do for you. It’s a measure of your intellectual edge. In the case of PQ, it’s about connecting people with the essence of your personality and the warmth of your authority. So while it’s good to be smart, it pays to be personably smart. This way people can connect with your heart.

That’s the whole idea behind shifting gears or turning things around on the job or in business. There’re lots more people in the pot than there’re those ready to land a spot. So to separate from the pack you have to have had made a name for yourself or to offer more than what people can get off the shelf.

It seems even when Harvey is in downtime he’s still making things happen. He might not be on the clock but he’s still on his game with his work in philanthropy. It’s about planting seeds, meeting needs and taking heed to the real power of his life’s calling. After a while he keeps doing what he’s doing with style. 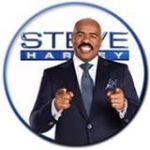 What does the name Steve Harvey bring to mind? Depends on what a Google search might find. Some people go back to his Amateur Night days. Others think about his comedy circuit craze. Whether Harvey brings it like a bull or a mouse. He’s worked his way up to becoming a media and biz powerhouse.

No small task for today’s brand at work. Many doing better than most to earn their perk. Happens in every career or dream track. Lots of high achievers listed front to back. Purpose in work served with passion. From the boardroom to the runway fashion. Where personality quotient or PQ is not in ration.

Everybody knows about IQ. What intellectual edge can do for you. There’s more in store with PQ. A measure of how your energy comes through. Connecting people with the essence of your personality. As well as the warmth of your authority. Yes it pays to be smart. So personably smart comes from the heart.

That’s the whole idea behind shifting gears. On the job or during your business years. Lot’s more people to be found in the pot. Than those ready to land a spot. So in order to separate from the pack. Could mean getting on the dream track. By making a name for yourself. Offering more than sold off the shelf.

Seems even when Harvey’s in downtime. He’s making things happen in primetime. He might not always be on the clock. When hanging-out fishing from the dock. Yet he’s still on his game. Adding philanthropy to his name. Planting seeds, meeting needs. Taking to his life’s calling heed. Putting style in good deeds.

Tip: Using personality to connect with your authority is an important element to becoming a powerhouse.

Talkback: When do you remember first hearing about Harvey and his brand?