Remember when Tyler Perry appeared on the Tonight Show with Jimmy Fallon? He was promoting his then new movie Nobody’s Fool which featured Tiffany Haddish. He talked about how he gave Haddish a new Tesla as a gift for her emerging talent. He was offering encouragement on her dream journey.

Well, fast forward to recent events and you see how thing have played out. This time it’s Haddish explaining how the car was a material gift, but the best gift that Perry gives today is for us to dream bigger. That’s what he wanted guests at his recent studio grand opening to take away from the event.

Now he’s 100% owner of the largest movie production studio in America, supposedly bigger than the three main Hollywood studios combined. Haddish is the newest host of the re-booted Kids Say the Darndest Things. Their stories remind us that it’s possible to turn lemons into lemonade.

Folks are still raving about the ‘glory to glory’ theme of the event. Some say it had a Met Gala feel. Others think it was like Emmys, Grammys and Oscars combined. Those events usually have guests leaving with a swag bag. But Perry’s guests might have left with a dream bag that had success tools like a:

We know the many artistic sides of Perry. His work has traveled the world over. A compass is good for going in the right direction not just on the road but also the highway of life. It’s in going north, east, south and west in the direction of one’s purpose, calling, passion and dream guiding you to fulfill your destiny.

They say it feels like time stops when passion is in play. You forget about time as in the clock edition and operate with time as in the divine edition. This way you’re not getting upset when things don’t work out on a rigid schedule. Perry’s seen both clock time and divine time at work that’s brought things to pass. 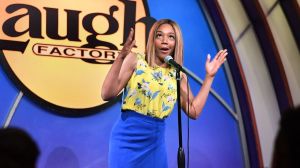 Haddish will tell you she wasn’t the best student in school. She writes in her book of how a certain teacher helped her with reading. With all the success coming her way now, she’s probably happy for a calculator to add-up the checks. It’s also a success tool to correctly calculate risks for the next-level rise.

She probably remembers days as a child having to wear certain hair clips. They were a staple back in the day. Today she’s excited about the video clip that came with the Perry invite. That’s another kind of memorable clip along with many others from the event that guests will cherish for years to come.

Perry says he remembers being invited by Oprah to one of her Legends Balls and thinking to himself, “why am I here?” Well it’s that personal reflection clip that inspired the past decade or more of his life. He’s grateful, mindful and fruitful. Maybe it’s a glimpse of life with unstoppable blessing on blessings.

Tip: A swag bag might come with treats for style & beauty. But a dream bag comes with success tools like a compass, clock, calculator and clip to fulfill your destiny.

Talkback: How crazy is it for Perry to now own what was once a Confederate military base?