The hype is over! With another Superbowl in the books, some in biz are counting their wins and maybe even losses. Whether it was the low-scoring game or the low-lights from the halftime show, the game saw a dip in viewership. The crowd-favorites were the pre-event concerts and post-game after-parties.

As the cross-talk in sports circles about the game and the culture gets heated, folks wonder if there’s a message for the NFL brand. As a former NFL player, Terry Crews might have something to say from a sports point of view. While Taraji P. Henson might let ‘Cookie’ say her piece as an ‘Empire’ cultural icon.

But beyond that, they might reveal why nothing compares to the high they feel in their careers these days. He’s the newest host of America’s Got Talent World Edition while she just got her star on the Hollywood Walk of Fame. They both remember a time when they had to flip the script in their careers.

Henson says she started out doing sitcoms in the early days, thinking that comedy would be her thing. Crews shares how he had to turn his playing days into stage plays as a new form of ‘hustle-love.’ Now it feels like with major roles coming in that they could share tips on being a ‘go-to’ person in the workplace.

If there’s one good reason why they’re doing their best work or getting the best assignments it might be in how they traveled the road to excellence. They developed their craft, project by project. It’s like the ‘got milk’ campaign for building strong bones, their career might have its own 4-part slogan for strong game:

They spent time learning the ropes as they played the roles. There was a time when having a skill meant applying it to a certain trade. This way folks often made a living with their hands. But these days ‘got trade’ might also be about developing your brand as a trade and making a living with all ‘hands on deck.’

Henson finds herself doing Empire on the small screen and breakout movies on the big-screen. Crews is also wearing many hats in a similar way. They use their skills and build their brand to create ‘got paid’ money moves. That means they turn their off-season in one area into their on-season in another area. 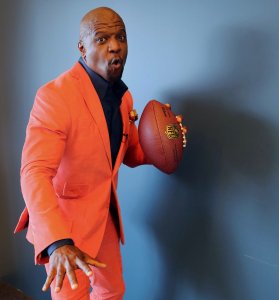 Crews tells the story of hosting a talent show back in high school. It was his way of getting his mom to support his early showbiz dreams. Now things have come full-circle in hosting AGT as a worldwide TV franchise. Maybe the way he ‘got praised’ back then was a sign of how he’d rise to doing big things today.

Henson shared how she got more serious roles after early days in sitcoms. She adjusted her ‘flow and style’ to land those gigs. The same is true for Crews in going from the football field to a different field of dreams. Some say watching them ‘hustle-love’ in their career lanes gives us a certain kind of high.

Tip: When it comes to being one of the ‘go-to’ persons at work, it takes developing your craft project by project to the point where you bring a certain kind of high to the marketplace.

Talkback: What kind of high do you get watching Henson and Crews do their thing?