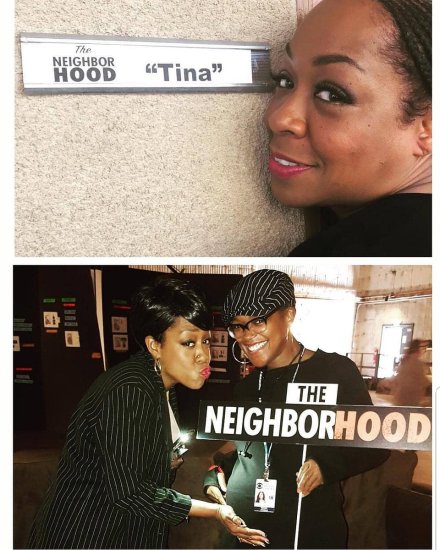 Looks like things are about to change in the neighborhood. That’s one way to describe the theme behind the new CBS sitcom with Tichina Arnold and Cedric the Entertainer. They have new neighbors and let’s just say nobody saw this coming. They want to be welcoming but some things may have to grow on them.

That’s a way Arnold might describe her own career path. She’s been around the Hollywood block a few times. Some remember her on the show Martin. Others loved her on Everybody Hates Chris. Now she teams up with Cedric on a new show that’s gone from pilot to getting the green light for a full season.

Arnold and Ced have been making career moves that look like a walk in the park. What’s their secret? Maybe it’s in finding the right collaboration. They recognize when the right part needs the right partner. For Ced it’s doing the stand-up circuit with fellow comics. For Arnold it’s being with the right crew.

Over the years they’ve racked-up some major roles on the big screen and TV tube. Ced recently got his star on the Hollywood Walk of Fame. He’s even featured on a Network TV magazine cover. They’re hoping to keep the jokes coming and the money flowing as they continue to grow their body of work.

Arnold thinks back to when her heart told her that singing was something she wanted to do. After standing before a church audience she belted-out a song that was part gospel and part nursery rhyme. They both moved to Hollywood to make it big. But Arnold says she got advice that was sort of like:

Arnold tells of an Uncle whose advice was to look in the classifieds for acting auditions. He thought she could tryout and maybe find her hustle love. Sometimes hustle is something you do. Other times it’s something you have. Arnold and Ced are show co-stars. They might as well be like hustle love partners.

The audition line was where Arnold found herself week after week. She knew she had something to offer. It was just a matter of talent and timing. She couldn’t control the timing but she worked on her talent. In normal circles talent is what you bring. But in showbiz, talent is who you are and how your value is sold.

Sometimes moments of pain in life can push us to live with real purpose. Arnold had a moment where she was locked-up for using a stolen credit card. Her sister who works as her manager has had some health challenges. These experiences have helped to shape how she serves some earthly good.

There’s good work she does in her starring roles. These have allowed her to keep the lights on at home and give back. There’s good work you do that makes the God in you shine through. Plus, there are different levels to being a showbiz star in Hollywood. Arnold and Ced want to keep rising to new heights.

They and the supporting cast are excited about the new sitcom. In the TV world the goal is 100 episodes. That magical number puts you in the running for syndication. With syndication the checks keep coming long after the show is done taping. Career moves that bring a body of work tend to payoff eventually.

Tip: The stars in showbiz make level-up moves in career by finding their hustle love, taking talent to new heights and going all the way to the bank.

Talkback: What’s it like having a workplace side-kick, co-star in showbiz or hustle love partner on your level?

India Arie – God in You – https://youtu.be/tkcpebHGHZg