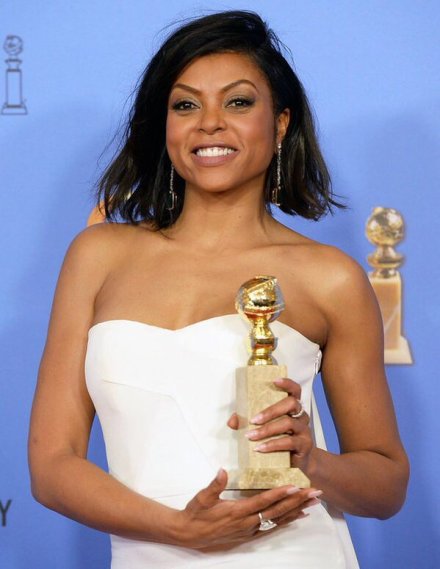 Hollywood loves the Golden Globes! The stars shine in full whether as household names or new to the game. Nominees wear their finest threads with fans falling head over heels. There’re those like Tyler Perry and Taraji P. Henson who’ve turned their early days on the block into praise that pays as a brand.

A recent headline on Perry in Vulture magazine said “The brand that keeps Oprah in business. He doesn’t care what the critics think of his work because his audience always finds it.” Perry and Henson represent the real deal and real cookie, making it in business for who they serve and who they deserve.

His TV show Haves and Have Nots is OWN’s highest rated and was the third highest scripted show on cable last summer. It’s a long way from his first stage play that wasn’t well received. His dream wasn’t derailed by doubt even-though business was in a drought. Six years later the play finally found success.

They’ve carved-out their own lanes in showbiz. Expanding from those early days on the block to their current brand identity has been a lot like selling groceries. If fruits were their brand then type of fruit would be their lane. A bigger audience they now reach but a certain niche is their sweet spot and favorite peach.

Henson who won for Best Actress in a TV Series, Drama was also named USA Today’s Entertainer of the Year. Time named Cookie Lyon most influential character in 2015. So cream rises to the top and Perry’s story reminds us that the more people you help go from obscurity, the more people achieve job security.

H’wood loves to rock the Globes hard! Folks screaming celebs from their backyard. Stars shine whether as household name. Or recent player in the red carpet game. Wearing their finest threads for real. Fans falling head over heel. Tyler & Taraji two who’ve turned their early days. Into brand and praise that pays.

Recent headline on the e-news stand. Vulture magazine thinks Perry lifts Oprah’s brand. Not caring what the critics think. Sometimes their words just stink. To his peeps he always stays near. Feeling there’s nothing to fear. Perry and Henson knowing who they serve. Real deal real cookie for who they deserve.

His TV show Haves and Have Nots leads the way. With OWN’s highest ratings is what they say. The third best scripted on cable. Coming from his ATL program stable. Distant past of his first stage play. Wasn’t well received but that was OK. Six year later through the doubt. Finding success beyond the drought.

Carved-out their own lanes as newbies. Now they’re swamped with product freebies. Going from early days on the block. To major brand identity hard knock. A lot like selling fruit or bread. Their brand in market lane of their stead. A bigger audience they now reach. A certain niche their favorite peach.

Tip: The real deal in biz, on the block or in Hollywood is having a brand go from regular to spectacular.

Talkback: How does it feel seeing Perry and Henson keep it real by remembering where it all started?

“You prepare for the next phase of your best life by how you put in the work to advance your game and a cause.”