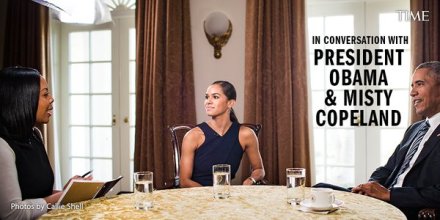 It’s been almost a year since Serena Williams lost at the U.S. Open. She was going for her 22nd grand slam win. Well, she just made up for that at Wimbledon. It’s been a year since Misty Copeland was named first ABT black principal dancer. Williams & Copeland are happy to let their bodies do the stroking.

Williams was cheered for doing what few others have. While Copeland told NBC News “I’m giving people hope that you don’t have to fit into this mold of what society has cut out for you in order to succeed.” They show us top 2 reasons for stepping out of the ‘comfort zone’ box that keeps fresh passion locked away.

Williams’ journey is one that came straight outta Compton. Not many expected her tennis greatness to rise from there. It was a matter of turning the game into her gateway. Now she’s ranked #1 in the world. Instead of getting caught-up with people talking about her body, she’s just taking care of business.

Copeland shared how she got her start at a Boys & Girls Club. It took a while to accept who she was and what she could be. But with the help of parents, mentors and pop culture idols she found the nerve to zoom past the curve. She pondered if it would happen and then realized it was up to her to stay in drive.

After her Wimbledon win Williams told reporters “This tournament I came in with a different mindset. I needed to be calm and be confident and play the tennis I’ve been playing for well over a decade.” It might have taken an empire state of mind to get a grip on things. Even so, the proof is in her body of work.

Been a year since ‘Rena lost. Going for record books at all cost. Played US Open on American soil. Now winning 22nd slam in Wimbledon toil. Misty a year later after new ABT role. Kinda speaks to the human soul. Both happy to let their bodies do the stroking. Whether on dance floor or tennis court just joking.

Serena cheered for joining the few. Reaching where others wish they knew. Misty doing her thing to spread hope. Not being tied-down by the rope. To fit what society wants to feed. Into the mold for folks to succeed. Top 2 reasons for stepping out ‘comfort zone’ box. For fresh passion that’s smart as a fox.

Serena had days on the Compton way. As dad took them out to play. Not many saw tennis greatness to be fair. But it sure did rise from there. By turning the game into her gateway. So that she can bring-it everyday. Now top ranked among her peers. Not body-shamed but doing things to shift gears.

Misty had share of feeling the rub. Got her start at a Boys & Girls Club. Took a while to see her diamond self. Which kept her mojo on the shelf. With help of friends and family crew. Started to see her possibilities anew. Found the nerve to stay in drive. Zoom past the curve to her next high five.

After Wimbledon win Serena speaks. With broad smile across her cheeks. Saying she came in with different mindset. Not getting lost in the moment’s jet-set. Calm and confident from over a decade. Is how championship tennis gets played. An empire state of mind to get a grip. Her body of work to let it rip.

Tip: Stepping out the comfort zone and stepping up to the challenge takes getting a grip and letting things rip.

Talkback: Which should people be talking about: Serena’s body or her body of work?

Theme:– “The Year of ‘Growmance’
Where Love Beats Fear in Upping Our Game This Year” (Old-School Flava)

”Jamaica is celebrating with the United States as Tessanne wins The Voice!” That’s how Carson Daley capped-off the evening of the season 5 finale. Chin was among three finalists in the competition. She wowed all the coaches during blind auditions. She brought down the house and took home the crown.

The reggae backup singer has worked with the likes of Jimmy Cliff and Shaggy. She even did a few duet performances on the show with industry superstars. Now she’s ready to do her own thing with a Universal Music recording contract. Her journey is full of inspiration for dreamers, career changers and job seekers.

Chin was one of a few who thrilled fans and coaches alike. She showcased her singing voice (without the accent) and her speaking voice (with the accent) to have crossover appeal. Chin used the power of having a passion-voice that spoke louder than just singing talent. This made the experience come alive.

There’s not much else she saw herself doing. Chin says singing has been her first-love. So she’s put in the time working on her professional goals. Where she saw herself years ago is moving closer to where she is now. Having a next-level vision has taken her from small-island dirt roads to big-country dreams.

Chin gave credit to her fans in Jamaica and the U.S. She also touched on the bond she developed with Adam Levine. Whether on a startup journey or the comeback trail it helps to have a co-sponsor in your corner, a vintage performance to standout from the rest and resilience like a rock to enjoy the love fest.

“Jamaica celebrating with the U.S., Tessanne wins The Voice prize chest.” That’s how Carson Daley capped-off the show. After a season of singers going toe-to-toe. Chin among three season 5 finalists. The competition felt like pure bliss. Wowing fans as the show begun. Bringing down the house and having fun.

The reggae backup singer from yard. Worked with Shaggy and Cliff, not a bad card. Performed duets with many a superstar. Winning it all and a brand new car. Now ready to do her own thing. With a Universal Music contract as her ring. Lots of inspiration for today’s dreamers. Career changers and job seekers.

Chin seen early on as one of a few. Her melody fell over you like dew. Showcased her singing voice with a little twang. Speaking accent different from how she sang. Gaining more in crossover appeal. A glimpse of being the real deal. Her passion-voice louder than singing. In how talent comes alive in her bringing.

Not much else she wanted to do. Chin knows it’s important to ‘be you.’ With her first-love in the lead role. A way of working on her professional goal. Seeing herself years ago. Closer to being in today’s flow. Having a next-level vision gives her new streams. From small-island dirt roads to big-country dreams.

Crediting local and overseas fans. Touching on the bond with Levine’s hands. Whether startup journey or comeback trail. Dreamers don’t quit even if at times they fail. Good to have support from a co-sponsor. As someone who holds-down your corner. A vintage performance from the rest. Lets you enjoy the love fest.

Tip: Upping your game means moving past your past, working on your present and zooming into the future.

Talkback: Was ‘Bridge Over Troubled Waters’ Tessanne’s breakout performance on the show?