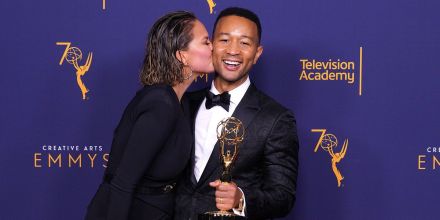 Who remembers the fast-food chain that made famous the question ‘where’s the beef?’ It was a way of saying their burgers had more beef than their competitors. These days the question some are asking is ‘what’s the beef?’ Nicki and Cardi are still working on the answer. Drake and Meek Mill say they’re done.

Well there’s no ‘beef’ between John Legend and Chrissy Teigen. Actually, there’s nothing but love. Sometimes sexy love other times ‘hustle love.’ Teigen says she’s getting back into the sexy swing of things now that she’s upped her role in motherhood. With two mouths to feed ‘hit and run’ has new meaning.

Legend is busy doing the showbiz thing after winning an Emmy for his work with the ‘Jesus Christ Superstar’ production. With this award he joins a select group of celebs who’re among the EGOTs. He’s the youngest and first black male to get an Emmy, Grammy, Oscar and Tony for his artistic roles.

This summer they spent a few weeks in Bali where Teigen appeared in social media posts wearing her ‘headband of the day’ while hubby John serenaded her with a song. That’s a long way from her days as a teenage catalog model and then gaining major fame as a Swimsuit cover model.

Whether it’s the sexy love between them or the ‘hustle love’ that fuels them, they celebrate how they refresh their shine for a brighter and wider fanbase. Teigen has a new cookbook while Legend is set to release new music. It’s the passion for doing their thing that tells us about how they up their game using:

Every job has ways for getting stuff done. It could be as simple as learning a script and executing the task. That’s how it goes for TV sitcoms and scripted programs. As a songwriter and singer, Legend knows the process. He uses that same skill to learn the job and produce the work with other projects as well.

With most work assignments there’s usually a learning curve. It takes some time to get the feel and flow of things. After a while a rhythm develops. That’s how it happens in the music biz and in other lines of work. There’s the groove track to which you add lyrics. This way you find your voice and rock the game.

A beach trip or Caribbean vacation is often a time to slow down and chill. Some might even checkout the view as the sun rises and sets beyond the horizon. It’s like watching time pass on life’s big screen. You get to stretch your sights while seeing the big picture. This does wonders for R&R and helping dreams go far.

The stage is where performance comes together. John Legend’s stage as a music artist is different from Teigen’s stage as a model. With your job or career, when things come together on the work stage there’s usually a sale, a promotion, a cheer or other forms of excitement as a return on commitment.

It seems like their celebrity side hustle of ‘headband of the day’ videos have taken a break. As they get back-to-the-grind they’re juggling work, kids and other steps that come with the role. And as they get out of bed to face another day they’re doing those things to shine in ways that moves fans and dollars.

Tip: As we get out of bed to face another day it calls for ‘hustle love’ which means doing those things to shine in ways that moves customers, fans and dollars.