It was an emotional press conference as Peyton Manning announced his retirement. After playing 18 seasons in the NFL he goes out on top having won Superbowl 50. He leaves the big stage for the next rising star. Not just in football, as Steve Harvey & Ellen team-up for the next generation of little big shots.

They feature kids in athletics, acrobatics and other antics. Ellen tells Georgia’s Albany Herald “It’s, for sure, not a competition show. Some of them are just talented kids, and whatever they end up doing, that’s great.” This is a big step to a Hollywood dream deal, not leaving home or hometown out of it for real.

As Executive Producers they’re calling the shots. The concept is somewhat of a segment spin-off from Ellen’s TV show. It’s similar to other talent shows and how industry leaders approach their career dreams. Great achievers start with an idea that gets flushed-out in the garage, basement or hometown backyard.

Harvey & Ellen are excited about what the ‘little big shots’ do. Their amazing stuff reminds us that dreams going from concept to reality are like ideas going from fish bowl to the ocean. Plus a special gifting can add more bounce to the ounce while engaging everything you’ve got to make a major splash.

“I don’t want to do anything just because I can,” she later said. “I think kids will love this show, and adults will love the show, too … because who doesn’t want to see an adorable kid with a talent?” This might be about showbiz value but also about giving a break or lighting a fire under flickering ideas and passions.

Emotional presser for Peyton Manning. Tears he couldn’t help fanning. Leaves the game he just loves. Flying away like peace doves. After 18 seasons at the helm. Took game to higher realm. Superbowl 50 his last stage. Other stars coming of age. As Harvey & Ellen team-up to make. Next gen ‘big shots’ take.

With kids who shine in athletics. Acrobatics and other antics. Saying it’s not competition show. But for talent to rain and snow. Whatever kids do it’s gonna be great. Another fat check on Harvey’s plate. Taking big step in Hollywood dream deal. Not leaving home or hometown out of it for real.

As EP they call the shots. New ways to sell TV spots. A spin-off from her daytime show. In its own lane and flow. Like ‘Got Talent’ and kids saying darndest things. Industry leading career dreams he rocks she brings. Designed in garage or home-alone in basement. Starting in the backyard or on street pavement.

Gung-ho about what ‘little big shots’ do. Amazing stuff prove what’s old can be new. Going from concept to reality-TV in motion. Ideas from fish bowl to the ocean. With special gifting comes more bounce. And leftover ideas by the ounce. Such memorable abilities in a flash. While making a big-time LOL splash.

Not doing it just because she can. Focused on becoming greater than. Maybe kids will tune-in from age two. Thinking adults will watch it too. Who doesn’t want to see talent rise? Or checkout younguns try evr’thing for a prize? Some showbiz value a must. Giving a break or firing-up passions is the thrust. 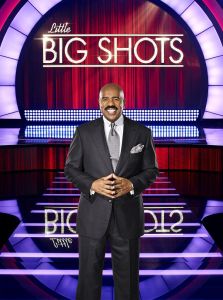 Tip: Big time dreams start as ideas that get moved from the fish bowl to making a big splash in the ocean.

Talkback: What’s it going to be like: no Manning on Sunday morning but ‘big shots’ on Sunday night?