The NBA playoff is when more amazing happens. We see incredible plays as teams compete for the crown. The second round is underway with a few players and teams making noise. The LA Clippers hung in there through their first round storm. And yes, OKCs Kevin Durant stepped-up his game all season.

Durant was named league MVP for the first time in his career. He gave an emotional speech during the ceremony where he thanked his teammates, trainers and coaches for their support. He left his most tearful words for his mom. He believes she’s the real MVP for all she did as a young single mother.

Durant must be especially happy because his teammates say he and as his game have become more complete. He showed more court vision, movement into open spots and better ball management. Durant shows in sports and in life, it takes challenge, consistency and a complete game to score like a champion. 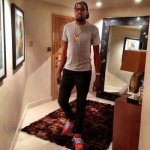 NBA playoff in full swing. Teams are on point doing their thing. Sure to see some incredible plays. As teams compete for the glory days. Second round action has teams showing poise. Sports talkers like Steven A. making a lot of noise. LA Clippers are still in the hunt. OKCs Kevin Durant is the man out-front.

Durant named MVP in the league. Showing no signs of fatigue. First time coming in his career. He had some extra votes to spare. Gave emotional speech during awards program. Thanked teammates, trainers and coaches for the honorarium. Most tearful words left for his mom. She’s the real MVP and then some.

Recognized her for her sacrificial love. Is like giving thanks to the “man above.” NBA fans say Durant stepped-up his game. It’s as if the word ‘challenge’ became his middle name. Teammate Caron Butler wrote “KD MVP” on a note. So Durant took that as a challenge and that’s what history wrote.

When asked about Durant’s MVP status. Lebron James said Durant was deserving of the fuss. Durant’s a more consistent player says James. He should know with multiple MVP seasons of games. LJ knows MVP is more than just a title or bragging rights. It’s a testament to consistency and extra practice nights.

Durant must be real happy beating James as a Heat. His teammates say he and his game became more complete. As seen on TV in more court vision. Plus movement on the court and passing precision. Durant shows us in sports and in life. It takes challenge, consistency and a complete game to overcome strife.

Tip: In sports/life it’s not so much where you start as much as how you make your skills sail to the top.

Talkback: Could this year’s NBA final come down to OKC and Miami?