“A Hand to Guide Me.” That’s the title of Denzel Washington’s book. It should be recommended reading as a mentoring hook. The proceeds benefit one of his favorite spots. They were there for him when growing up. Washington feels mentoring paved a path to purpose as an actor.

In looking back, it’s like mentoring gave him a sense of faith. It served as a ‘guardian angel’ in his life. He realized more and more that there was an ‘invisible hand’ guiding him along the way. Maybe that’s why he was able to go from being a PK (preacher’s kid) to being a DK (dream keeper).

At one point he wanted to become a Doctor, then Lawyer, then Journalist. His choice meant making a career decision not a money decision. In other words, do what you love, but not for the love of money. So he started to think and act as a free-spirit, trying his hand at different things.

He would ‘step-out-the-box’ and not be closed-minded. He took a Public Speaking class. One day he was asked by a friend whether he thought about being an actor. Later, he was told by a woman that he would be well-known. These tips gave him reason to study the famous.

Washington’s glad he learned to think and dream big. That’s a value of mentoring. It helps build aspirations. As he played sports he began to admire football greats Gale Sayers and Jim Brown. Sayers became his idol. Today, there’re lots of actors learning from and trying to be like Denzel. 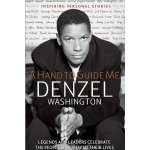 Why checkout Denzel Washington’s book? It gives mentoring a fresh look. Named “A Hand to Guide Me.” Should be recommended reading, you’ll soon agree. Proceeds benefit his favorite Club. It’s where he hung-out as a young cub. Finding a path to purpose as an actor. In Hollywood he’s a major factor.

Looking back, and moving ahead. Where a sense of faith was planted. Like a guardian angel in disguise. As he became older and wise. Realizing there was an ‘invisible hand.’ Guiding him around quicksand. Maybe that’s why he rose from a PK (preacher’s kid). To becoming an example DK (dream keeper).

Wanting to become a Doctor. Maybe Journalist or Lawyer. Meant he had to make a choice. For giving his dreams a voice. Making a career not money decision. To have a lifestyle that fit his ambition. Doing what you love for sure. The love of money is not the cure. As a free-spirit, think and act as close to pure.

He did ‘step-out-the box.’ Not closed-minded like toes in a sox. Doing some Public Speaking as a starter. Asked by a friend about becoming an actor. Later told by a woman one day he’d be well-known. Seeing acting as a stepping stone to being grown. Studying the famous and renowned.

Washington’s glad he learned to think and dream big. Putting him on a path to finding his gig. That’s a value of real mentoring. It helps build aspirations in training. In sports he admired Jim Brown and Gale Sayers as rivals. But today, many look up to Denzel as one of their idols.

Tip: Mentoring helps build aspirations, but it takes a sense of faith to bring the inspiration.

Talkback: Who’s on your list of top-three favorite actors (male or female) of all-time? Why?