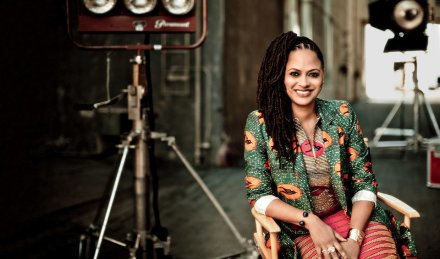 Every day we get to watch history unfold. More often than not its best understood looking backward. But that’s not where we should look for Ava DuVernay. She’s lined-up a $100 million Disney film set to begin shooting this fall. DuVernay is shaking things up in Hollywood and Courtney B. Vance is watching.

It’s been a breakout year of sorts as she’s also the brainchild behind OWN’s Queen Sugar. She’s made it this far with the mantra of “do not settle.” Whether in career or relationship this isn’t about being desperate. It’s really about being determined to spark a greater level of awareness reaching new heights.

DuVernay wants to be the story-teller that helps us discuss topics that are tough to swallow. It’s taken her a minute to get to this level of notoriety. But she might be the first to remind us of how not to second-guess or to sellout on the mission. This means sticking to the script that will fulfill profit and purpose.

It’s not clear if DuVernay knows Courtney B. Vance. He took the Emmy for playing Johnnie Cochran in The People v. O.J. Simpson. Vance sees a shift happening in TV that should transfer to movies. He shared pride in his own wife Angela Bassett, showing he feels strongly about women who push it forward.

Every day we get to watch. History unfold like hopscotch. More often than not it’s in looking back. But that’s not how DuVernay leads the pack. Line-up $100 million Disney flick. More than just being a hot chick. Shaking things up on Hollywood drive. Courtney B. Vance watching her come alive.

Quoted this summer in USA Today pages. About rolling through movie stages. The fact that a film can do well. With community around to help it swell. Conversation that keeps buzz grooving. With national moment forward moving. Knows others came before breaking glass. And doing enough kicking of.. (right!)

A breakout year in full view. For her and film making crew. Brainchild of OWN’s Queen Sugar hit. Made it thus far with “do not settle” or quit. In career or with your honey boo. Not being desperate but being true. Determined to see awareness sparking. Reach new heights and forget the skylarking.

DuVernay with new day story-telling. Topics that are tough and compelling. Her notoriety rising like the sun. In between eat, pray and have fun. Sure to remind folks not to second-guess. Just think about the big ‘S’ on your chest. Not to sellout either on the mission. Stick to script for profit, purpose and vision.

Who knows if DuVernay & Vance have met. There’s still some time yet. He took Emmy for People v. O.J. Simpson role. Playing Johnnie Cochran in heart and soul. Vance sees shift in TV programming. Should transfer to movie distributing. With pride for Angela Bassett his wife. Women who push it forward in life.

Tip: Breaking the glass ceiling or kicking down the door means switching desperation with determination.

Talkback: How does it feel to see DuVernay making strides on TV and in movies?