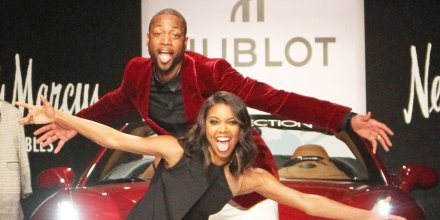 The regular NBA season is about to end. Some fans are getting ready for the game to go to the next level. The playoffs start in a few days and sports commentators are busy ranking a team’s chances to win it all. It’s the first in a long time that Lebron James will be missing and watching from the sidelines.

Another streak that‘s about to end is Dwyane Wade’s NBA career. He’s played for 16 seasons during which he’s won championship trophies, MVP awards and scoring titles. Wade’s been savoring the moment with his ‘One Last Dance’ tour in NBA cities, swapping jerseys with other players along the way.

Wade has become an icon to many for his hustle-love on and off the court. He’s been teaming-up with his wife Gabrielle Union in doing more than just the grind but also encouraging us to be who we were meant to be. They’re parents of a new girl born by surrogate that’s been its own life-giving story.

As Wade’s career takes a shift, Union is charting new ground in her career as a judge on America’s Got Talent. They’re both seen in TV commercials pushing each other on the treadmill but maybe even more importantly, inspiring us to grow in mind, body and spirit. They’re good examples of life beyond the grind.

Wade’s personal and professional journey is seen in a special video that is a big tear-jerker. He’s thanked by five people with their appreciation for what he’s meant in their lives. In the video we learn how Wade sees the game, the grind and the gift for making a difference. His hustle-love has been driven by:

The story behind the man is heard from his mom. She remembers falling short in caring for him due to her own substance abuse challenges. But when Wade showed love to her even then, she saw him as more than a son. Hustle-love can turn pain into gain, into something that’s paying or even a payback.

Wade’s not sure what’s next after basketball. He’ll likely pitch products beyond his sneaker line. If socks became his passion project, then wine testing is becoming a possible business passion. He says there’s something about the feeling around the ‘wine & dine’ experience with others that gets his juices flowing.

He knows things could have gone differently as a child. There were times of lack and lost opportunity. But people gave him a helping hand and he wants to do the same. That came through in the video for how he’s fulfilling his purpose. Hustle-love through purpose means ‘hustle & love’ to serve the people.

During the last week of the season fans came out to show love. Union defended him against those wanting to dim his shine. NBA coach Gregg Popovich said Wade’s hustle-love is bigger than the game of basketball. And President Obama put in a word saying “Wade’s done us proud” grinding all his life.

Tip: Showing up for work is more than just making a living. It’s bringing hustle-love through the pain in a project or where passion can serve a larger purpose.

Talkback: How has Wade changed the game after teaming-up with Lebron and Bosh?

“Good times come when life’s moments get turned into motivation that leads to a journey for your comeback story.”